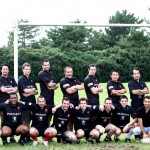 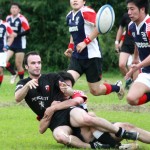 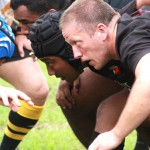 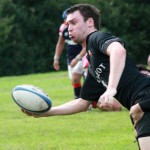 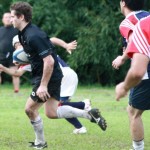 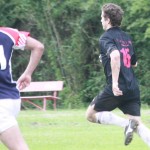 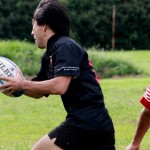 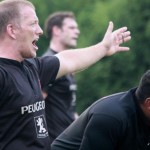 Despite so many departures at the end of the last season, 21 players gathered for the 1st game of the season and the 1st game of the Shuto League. A team really interesting comprising old and new players. The front row was the best one we can get with Charlie BARLOW, Kosuke YAMAMOTO and Joe HERBERT who signed his return on the field. Ken ISHIKURA and Toru HIGASHI were there too as substitutes. The 2nd row was probably our best as well, with our tall and powerful Matthieu VIGNAULT and our newly wed Hirotaka KOSHI. Many front rows gave us the opportunity to place Matthieu ROSENBERG as number 8, a position where he can really show off his immense rugby talent with Laurent SERENA et Andrew GRAHAM as flankers. Jerome BLANCHET was the potential substitute to them. As scrum half, our young and talented Alban FIDRY. The big issue for Damien MARTY and Bruno LEROY was to name a fly half in the absence of Damien MARTY for injury and Matthieu DERYCKE’s parent’s decision of no rugby to him. Finally, it was Thomas BYRNE who took the responsibility. To reinforce the centers, mainly in defense, Xavier LERIN was associated to Kazusaku KAMIYA. The wingers were a new comer but long experienced player Sho ARAKI and our newly appointed President, Jean Philippe ENDRES. The full back position was granted to our will-o’-the-wisp Florian de CHABOT. Backs substitutes were new comers Jeremie ROUMEGOUX, Philippe MIQUEL and Keith HUDSON

Kick off was given by the Mocossus but on the catch, the AFRC made a knock-on. And it was like that for 50 minutes, our team was pressured by the freshness and the excellent organization of the Moccossus. I think that we spent more than 90% of that time in our own half and the ball possession was at 95% in favor of our opponents during this period. But the AFRC was strong, weighed down but did not break up thanks to repeated excellent tackles from Alban, Tom and Xavier and Kazu but it was also the 2 extraordinary saves by Jean Phi at 10 m of our try line when he was at 2 versus one.

And then, the AFRC was very opportunistic when Xavier picked up the ball after a knock on of the Moccossus in our 22m. Quickly, he passed the ball to Florian, who carried it until the 22 m of the Moccos. As he noticed that Showas on his left side, he was smart, fixed the full back to pass the ball in a perfect timing. Sho has only to run to the try line and scored the 1st try that Tom converted (24′)

But, despite a lot of courage, the AFRC were forced to concede a try (non converted) at the 34′ when after a serie of pick and go, their 2nd center grounded the ball behind our line. 2 mms later and just before the half time, an off side on ruck (18 faults in this sector of the game) gave the opportunity to the Moccos to lead the game for the 1st time as they converted the penalty. Frankly speaking, with such a large domination, the AFRC may find themselves lucky to trill by one point only.

During the half time, Damien and Charlie repeated the values of rugby which are fighting and pride. The coaches decided also to substitute Joe for Ken, Hiro for Jerome and Jean Phi for Keith to bring new blood.

Unfortunately, the start of the 2nd half was the same as the 1st half with an important domination of the Moccos. Their efforts paid off when they scored at the 46′, a try by their #8. The try was converted and the score inflated to 7-15 in favor of the Moccos. Damien and Bruno started to fear the worst; But, as well. they noticed that the Moccos players took more time to stand up or to move. One of the best examples was when Matthieu VIGNAULTcharged and hit one of their forwards who was injured on the action. But, also more knock-ons occurred on their side.

More coaching was decided with the substitution of Kazu by Philippe, and at water break, Ken for Toru and Sho for Jeremie. Damien’s instructions were to drive mauls, to ruck as much as possible. And what was said, was executed. Several excellent ball catches with 2 hands by Andrew on our line outs were converted in driving mauls for 10 to 15 m, and soon after an excellent work form he forwards, Alban opened wide to Tom who made a fantastic triple skipped pass to Keith who run along the touch line to score our 2nd try. Score was reduced to 12-15 at the 57mn.

The AFRC did not stop their efforts and continued with this maul/ruck strategy which killed the Moccos and 4 mn later, Xavier, in an individual effort, went behind the try line to give back the lead to the AFRC. The try having been converted by Tom, score was 19 – 15 and 9 more minutes to go. Everyone understood that we were still exposed to lose the game if our opponents scored a try and also that we may get one bonus point if we might score a 4th try.

This aim was achieved thanks to a new maneuver of our 2 Irish guys. At the 65mn, Keith got the ball from Tom and scored his second try of the day to bring the score to 24-15. With 9 points ahead and only 5 mms to go, the victory was in the pocket!!!!!

*ANALYSIS*: We got probably one of the best games of the AFRC for long with an iron defense from the backs then in 2nd half, our forwards were unstoppable. Few line outs were badly negotiated and our rucks were strong and efficient.

On the bad points, too many faults at ruck and mauls (18), but also 10 knock ons. Rules explanations are necessary for the 1st point and training is needed for the 2nd one.

*AFRC AWARD* The ex Co designated Xavier as the best player (3 votes) and 1 vote was credited to Charlie for his great leadership as captain.

For the Iron man award, Matthieu ROSENBERG wants to keep his trophy as he leads with 5 points

For the best try scorer, Keith with 2 tries is in the pole position

For the best player award, Xavier LERIN made a gap with already 3 points

Bruno Credit Photo: Chie Imaizumi (Thank you for so great pictures. You are the best）