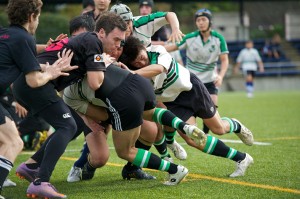 The clock ticked 30 mn within the 1st half, and the scoreboard was showing AFRC 22 BAKU 0. Already the bonus point was in our pocket. And a game nearly dead. Everything started fast, thanks to a quick and efficient play, now our team’s trademark. After 4 mn,  Kosuke YAMAMOTO scored the 1st try after one of the most beautiful tries I have ever seen for the last 3 years with the team. Everything started with a maul set up by our forwards, then, Taka opened wide. Ball reached Keisuke KINOSHITA, who went through, supported by Florian de CHABOT, who played one of his best games with the AFRC on that day); a ruck was formed at the 30 meter from BAKU’s try line. Kosuke got the ball and run powerfully to ground the ball under the posts. 9 minutes later, our Irish gang showed us great ball handling when Tom BYRNE got the ball from Matthieu DERYCKE, passed it to Keith HUDSON who was tackled 5 meters from the Baku’s try line, but was able to pass it back to Tom who went to try in the left corner. 12-0 after 12 mns. 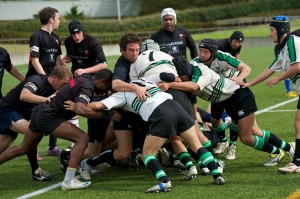 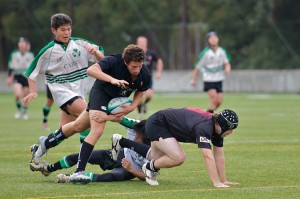 The BAKUs were K.O and wondered probably how to reverse the trend since they played with the wind in their backs for this 1st half. Then, we scored 2 tries by Florian de CHABOT (25 mn and 30 mn), our formidable right wing, who proved how good are his decision makings, his reasonable risk takings, his speed and his good ability at kick.  Unfortunately, these tries were not converted. But, at half time, the AFRC led by 22 to 0, with a 2nd half with wind in their backs and Baku’s having the sun in their eyes.

Since we were 22 on the score sheet, Bruno LEROY started to replace players to let everyone play. Some were forced to as Alexandre BOYER who was injured at his left shoulder at the 23rd mn of the 1st half (Replaced by Jerome BLANCHET) and then, as Matthieu DERYCKE of which his anckle was hit few minutes before half time (replaced by Isco GANIGA), some other were pure coaching with Ken ISHIKURA replacing Joe HERBERT and Sebastien DECAY for Yoshiki KITAUCHI.
At the start of the 2nd half, we needed some time to adjust, until we scored a new try at the 17mn.

At 27 to nil, with only 15mn to go, all the substitutes players came in: Francois LAFAYE for Masahiro SANO in 2nd row, Ogawa for Vincent DAUTEL in 3rd row, Toshiki SAKO for Alfred MAMUN as fly half, Kazusaku KAMIYA for Keith HUDSON as right wing, Philippe MIQUEL for Florian de CHABOT as left wing, Dan CONNOR for Tom BYRNE as full back. But, the quality of play of our team went dramatically down, mainly once again in ruck situations when we were penalized 5 times in the last 15 mns for only one penalty given for the first 65 mns. The BAKUs came back by scoring two tries (54mn and 67mn) to close the score at 27-12 in favour of the ALL FRANCE. Superb and deserved victory.

But, we were also very good to leave some easy points behind us. The most remarkable mistake was when Alfred went through the BAKU’s try line on the far left end side, run with the ball in the in goal with the aim to ground the ball  between the posts. He was to easy and was tackled by a BAKU’s player and let the ball to go out of his hands. Plus, we may mention that easy conversions were missed by Matthieu D and then, Isco. These mistakes should not be repeated for our next game which will be a play-off game to reach the 1st division of the Shuto league. But, don’t avoid our pleasure! The game was nice and well controlled by the AFRC. For the 1st time, the AFRC achieved the pool games with only victories. Cherry on the cake, we got a bonus point for each game to finish with the maximum points on the table. After 4 games, 22 tries were scored, 134 pts for and 56pts against for an impressive 78 points positive goal-average. One more game to win and we shall celebrate with proud and hapiness these superb stats during our Bonenkai party in December. 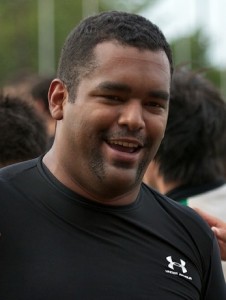 For the Iron man award, Matthieu ROSENBERG has extended his leading position by 2 points over Jeremie ROUMEGOUX. For the best try scorer award, the absence of Robbie WILLIAMSON was used by Thomas BYRNE to close the gap. but the big winner of the day was Florian de CHABOT who points at the 3rd place thanks to his 2 tries on that game.
For the best player award, Thomas BYRNE took the lead over Xavier LERIN as he received one vote. Joe HERBERT got one vote also.