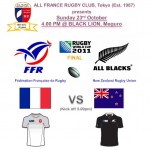 The Rugby World Cup 2011 is coming to a close and we would like to thank you all for your support and coming to the games at Black Lion for the past 6 weeks. We sincerely hope you enjoyed it as much as we did.

But before that, there is one more game for Les Bleus and the Blacks to play! And what a game it will be!