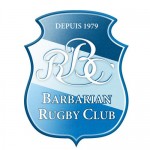 As announced a few weeks ago, The French Barbarians are coming to Tokyo to play two test games VS JAPAN later this month.

For those who do not know the “Babas” (nickname of the French Barbarians) they are a French equivalent of the Barbarians and the Irish and British Lions: a selection of talented French and non-French players who play in France (more on http://www.barbarian-rugby-club.com/ and http://en.wikipedia.org/wiki/Barbarian_Rugby_Club).

This year, amongst other famous players, there will be Sebastien Chabal and Jonny Wilkinson (unless Wilko is held up in France since his club (Toulon) made it to the final).

Price is 2,000 JPY/head. Many of of us are thinking on going on Sunday.

Send me an email before Friday if you are interested & we will get group tickets and possibly a discount.

2- Beyond the games, the French Barbarians and French rugby legends coming with them (J-Pierre Rives, Denis Charvet etc) are looking forward to enjoying their time in Tokyo. They arrive in Tokyo on June 16th and leave on June 25th. They will have some official parties with sponsors and officials but they are also going to go out at night. To accompany them, the AFRC has been asked if we have any volunteers to help them discover Tokyo by night (after 10pm). If some of you are interested to bring the likes of Chabal and Wilko around Roppongi or share a beer with Denis Charvet and J-P Rives etc (infamous party-goers), let me know! This is a unique occasion to meet and spend some time with some rugby legends and show them around our city at night.