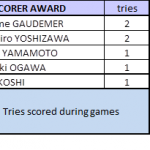 After a long break and no training due to snowfalls, we played a good game of rugby against Crusaders last Saturday for our first game of 2013.

Impressive first half by us after a long time without playing together whereas, our opponent, Tokyo CRUSADERS (aka CRU) was red hot from playoff games they played in late December and early January to get to Div.1 (FYI, the defeated All JIN JAN and they will play in Div.1 in September 2013).

Against the course of play, we conceded 2 tries in the last 5 min of 1st half on mistakes/turnovers but we were dominant in the set pieces and showed good ball handling. Still they were early signs of stamina wearing off or defensive lapses (couple of missed tackles) which CRU clinically took advantage of.

The game was lost in 2nd half due to further defensive lapses or turnover balls that gave them easy tries and also injuries which forced us to have players playing out of position.

Injuries sustained to two players (dislocated shoulder for SHINGO-san and cut eyelid for NAIKI span) forced me to reshuffle the forwards and the backs since we were back heavy with few options for front row and third row.

CRU ran a few tries in a period of 10 minutes and the spirits were an all-time down. We were 38-7 but we hold on to the ball and showed some great grit and fighting spirit. We managed to get back on the score board twice although the game was out of reach. Final score 38-21 (AFRC tries were scored by Kenjiro, Taro and Taka with conversions from Kazu and Yama x 2).

CRU deserved their win but the 2nd half and the score line at some point (30 point down) did not reflect exactly the game especially the first half. We have to be clinical in our execution and make our opponents pay when we get in their 22.

For the positive, I would like to highlight our lineout which worked very well with very good syncing between Kosuke and our jumpers well done.

The new comers blended well in this game.

Our half backs had very good offensive launches with Hamza at center and our full back and winger had some good runs (although some opportunities were wasted due to poor ball handling, no names ☺)

Special note for Keith, our Irish winger on his comeback game after his knee injury. On the left wing, Keith got two balls and left the CRU defense for dead twice. He was the main actor in our third try after a solo 50m run which was concluded by Taka after Keith was taken to the ground by the CRU left winger (coming to the rescue of his full back!).

2-Xavier leaving Japan: Our starting inside center Xavier (aka XABI) is leaving Japan in 10 days (transferred to BELGIUM).

Please join us for drinks with him at BLACK LION in Meguro on Saturday from 9.30pm. We will also watch the 6 nations there. Expect a PAQUITO of course and maybe Belgian Waffle! (SCOTLAND-ITALY from 11:30pm Tokyo Time, FRANCE- WALES from 2am for those who survive tequila rounds). I will book a table in the back room. Cash bar.

That’s it. Hope to see you on Saturday to send Xavier off with a great party!

PS: Stats up to last night (not all MVP votes have been collected yet for last game).