On Saturday 23rd July evening, Benoit and Nicolas organized their sayonara party as both of them have been transferred by their company back to France

Despite it was already the summer holidays, many of us gathered at the Black Lion from 8PM onward 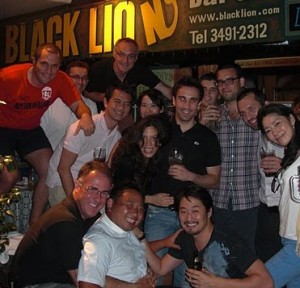 Matthieu ROSENBERG, Alexandre MIROUX, Bruno LEROY, Nicolas TANSAUD,
Sisi Kwai FONG, Marylin and Damien MARTY, Etienne TOULOUSAIN, Matthieu
VIGNAULT, Jean Philippe ENDRES, Hiro and Madame, Benoit RENGADE, Kosuke
YAMAMOTO in front of the Black Lion. Not on the picture Yoshio NAIKI and Toru HIGASHI.
What a great sayonara party! I think one of the best, if not the best I attended for the last 2 years. I expected to leave at 11PM pretending I had to catch the last train back home (In fact, I rode my bike) but, since the atmosphere was so good, after short negotiation over the phone with my Dear Darling, I got the permission to stay to 1AM, which became 2 then 3 to depart finally at 4AM.
In fact, everything started smoothly with beers and food, with discussions around pleasant souvenirs. Naiki and Toru were here along with Matthieu and Benoit. 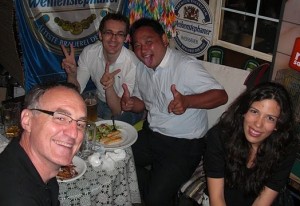 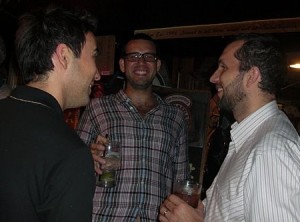 Then, they were joined by Damien and Marylin, Jean Phi, Hiro, his future wife and 2 friends, Matthieu V.
When David L’Oreal arrived in a place where he did not expect us, the atmosphere started to be more rugby like, you know, this atmosphere composed of song and drinks, all together. 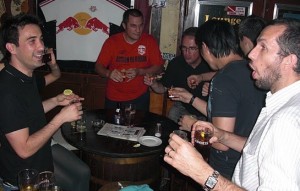 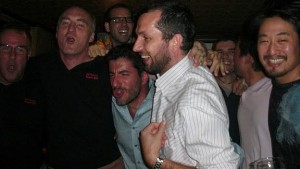 From this time, beers were forgotten and tequila became the beverage to cheer through the famous “shot, shot, shot……. everybody” that left us the remarkable Stef DG, the king of the Japanese nights.
Then, around 2AM, the Black Lion became a private bar only for us up to the very end of the night.
When I needed to come back home riding my bike, the road was long, long, so long. It took me 1h00 to make 8 kms…..
Yes, it was a superb sayonara party!!!! Because we were together in a place like at home, where no loud music, no girls (except those dear to our hearts….) were here to disturb us as it could be at the night clubs in Roppongi.
And it remembered me so well the parties we organized at the AFRC 20 years ago with songs, drinks and lot of laughs.
Benoit, Nicolas, Thanks for that night. Thanks for your commitment to the team. Everyone appreciated both of you. Sad to see you leaving us. But, it is sure we shall meet again soon in France for the Old Boys parties or if you are back to Japan for business trips or simply holidays.
Bruno
Photos: Hiro